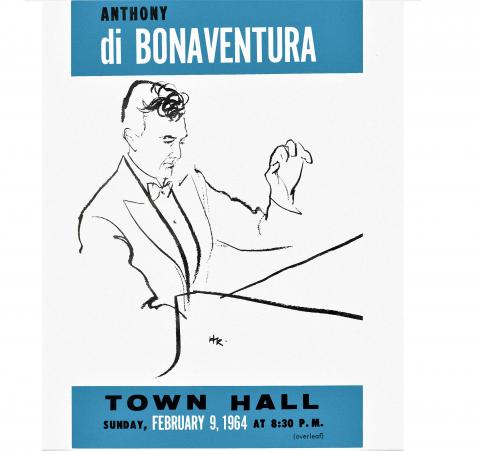 Performance review from New York Times, Feb. 10, 1964 Anthony di Bonaventura gave his first recital here since 1960, reinforcing the impression that he gave then of being a strong pianist with an exciting technical command of the keyboard. Appearing in Town Hall, he played a taxing program that was interestingly arranged: Dallapiccola’s Sonatina Canonica, Mozart’s Sonata in C (K.330), Ginastera’s Sonata, Beethoven’s Sonata in A (Op. 101) and Ravel’s “Gaspard de la Nuit.” The pianist had these works in his fingers, sometimes at extremely fast tempos. Since he knows a good deal about tone color, he made the pieces sound different as far as texture was concerned. Yet curiously there was only one stylistic attitude with which Mr. di Bonaventura approached the music, and it had some odd results. For fast music, he liked bold outlines, strong colors, abrupt shifts in pace and dynamics. A passage in itself would have a steady momentum, but there were breaks between passages. For slow music, the approach was clinical, the melodies picked out so carefully as to sound static. The Ginastera sonata came off brilliantly; so did the delightful Dallapiccola sonatina. There were moments of quiet penetration in the Mozart and Beethoven works, but the former tended to be dry, the latter violent. Even the Ravel suite did not flow as it should, as the pianist broke the music up into a series of effects, if tonally brilliant ones. -R.E. https://timesmachine.nytimes.com/timesmachine/1964/02/10/106937800.html?pageNumber=22