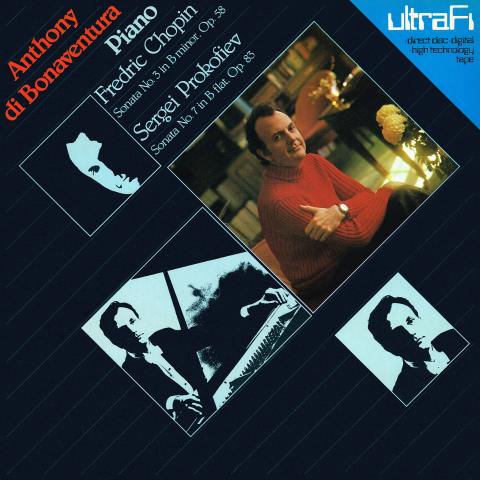 Anthony di Bonaventura – pianism that is a joy to hear. This fine -sounding recording is confusingly billed as "Ultra Fi-direct disc -digital -high technology tape," and a column on the back of the jacket discusses the assets and limitations of all these methods, implying that all are indeed used here. Not so: This is, in fact, an analog product, whose only departures from the norm are highspeed (30 ips) tape mastering and (apparently) careful processing and pressing. Which goes a long way toward confirming my nagging suspicion that the real reason audiophile products sound better is that more care is lavished on their production, not because of any intrinsic superiority in the method of capturing live sound. If anyone can deliver note -perfect performances without benefit of retakes and splices, Di Bonaventura can. Years ago, I heard him do just that in a recital performance of Chopin's B minor Sonata. His recorded performance, presumably edited, is equally poised but considerably riper and more interesting. Without being in the least eccentric, the rendition abounds in noteworthy details. Di Bonaventura observes the exposition repeat in the first movement, as do Argerich and Weissenberg but, to my knowledge, no other artists. He has an acute ear for inner voice detail, without its being obtrusive. He is a master at shifting gears and characterizing phrases without in any way departing from modern practice or violating the longer line; the sense of continuity is far stronger, for example, than in Ashkenazy's recent London version (CS 7030, February 1979), cultivated and well played though that was. Throughout, the purling passagework is a joy to the ear-and a perpetual source of despair, undoubtedly, to any rival practitioner. The annotation states that Di Bonaventura made the first American recording of Prokofiev's Seventh Sonata, but I can find no evidence to disprove my belief that Horowitz claims that distinction. In any event, the present account, slightly understated but very spry and transparent, is more akin to the linear Richter interpretation (Turnabout TV 34359) than to the more massive and heroic readings of Horowitz (RCA ARM 1-2952) and Gould. Again, the pianistic finish is most impressive; onlya bona fide virtuoso could clarify the onslaught of the finale to such as degree without sacrificing headlong momentum. The piano tone is a bit spikier on the secondside, which contains the Prokofiev and the last movement of the Chopin, but thesound of this excellent release remains of demonstration caliber. H.G.