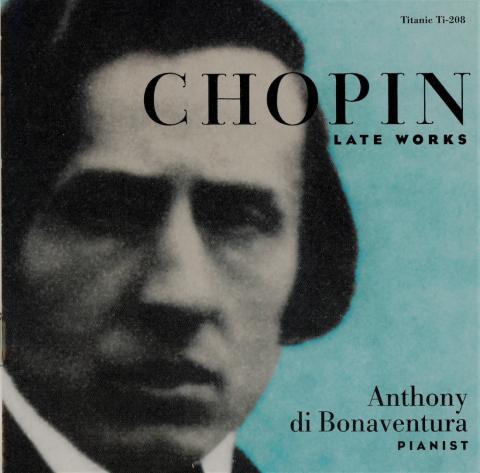 When Titanic Records decided to reissue my recording of the B minor Sonata of Chopin, I thought it was an ideal opportunity for me to accomplish a cherished goal: to record those works of Chopin which I consider to be the greatest among the great. The four works presented here are in my personal pantheon of Chopin’s music. The list can, of course, be expanded to include such works as the powerful F minor Ballade, Op. 52; the astounding F# minor Polonaise, Op. 44; the delicate Berҫeuse, Op. 57; the great Bb minor Sonata, Op. 35; the exquisite Nocturnes, Op.62; and on and on. However, I always come back to these four works which seem to me the epitome of Chopin’s creative genius. The Scherzo, Op. 54, with its quicksilver personality of short phrases and extended melodic lines brings the form to new heights. The Sonata, Op. 57, overflowing with ideas and emotions, casts a large shadow on all subsequent sonatas. With the Barcarolle, Op. 60, a seemingly simple idea is transformed into a powerful and epochal statement. The Fantaisie-Polonaise, Op. 61, Chopin’s last major work-and arguably the greatest-with its extraordinary chromaticism, tonal exploration and, structural freedom, leaves us in both wonderment and great sadness that his early death at age 39 cut short his magnificent creativity.

A few years after winning the Queen Elisabeth competition in 1956, the volatile young Vladimir Ashkenazy recorded the Chopin B Minor for EMI, a performance still memorable for its restorative compound of poetry and impetuosity. Over the years, the sonata has remained one of the touchstones of his keyboard repertoire—but his playing has turned colder, more insistent, and more studied. His rhythms, while hardly metronomic, have tightened their grip on the music (when he slows down, it's more likely to boost intensity than to enhance sensual allure); his colors have darkened (he doesn't let much sun in for the first movement's second theme); his dynamics have leveled out; the center of his tonal gravity has dropped; his surfaces have become plainer, less adorned with expressive detail; and—most obviously—his pulse has slowed. Those who are discomfited by Chopin's sentiment may well appreciate Ashkenazy's increased resistance to outbursts of emotion: the bleakness of the Largo is especially striking. Still, his lack of fussiness can slip into mere want of differentiation (especially in the A sections of the sonata's Scherzo); and many of the music's odd flights of imagination (especially in the first movement's development) sputter arbitrarily under the pressure. Much the same interpretive deliberation colors the Preludes, At their best, they fluctuate between the secretive (try No. 4 in E Minor) and the cruel (No. 14 in E♭ Minor is impressive for its mean glint—just as No. 18 in F-Minor bursts forth with a splendidly hard anger). But in part by refusing to let the rests sound, he chokes the air out of the G Major (No. 3); and by rejecting all remnants of sentiment, he makes the A sections of the Db Major (No. 15) seem almost trivial, thus undercutting the contrast to the B section. Then, too, his slowish reading of the Eb Major (No. 19) turns the music sing-songy; and while his technique is infallible nearly throughout this disc, there are some surprising marks of strain in the Gfl Minor (No. 12). Generally good production, too (although key signatures of several preludes have been skewed on the insert). Recommended for those who like their Chopin on the Brucknerian side. Ashkenazy's pulse may have slowed; in di Bonaventura's drawn-out 1992 performances of the Scherzo No. 4, Polonaise-Fantaisie, and Barcarolle, rhythm seems to have been paralyzed completely. To be sure, as on his diffident recording of Rachmaninov op. 32 Preludes (Fanfare 14:6), di Bonaventura shows himself to be a scrupulous musician with an often luscious legato; and there are moments (his nearly impressionistic reading of the opening of the Polonaise-Fantaisie, for instance) where the static temper of his playing hypnotically coaxes out a dreamy pensiveness. But more often than not, his distrust of—even aversion to—drama, much less virtuoso display, leads to interpretive self-annihilation: you'd be hard-pressed to find alternative performances of these keyboard staples which say so little, and say it at such excessive length (the Barcarolle, for instance, normally in the eight-to-nine minute range, is here stretched to almost twelve). Except in the draggy account of the Largo, the sonata, recorded in 1979, has more character and more momentum (it could hardly have less and still fit on the disc). Even here, though, there's an impassibility that makes today's Ashkenazy seem positively flamboyant by comparison. For di Bonaventurists only. -Peter J. Rabinowitz This article originally appeared in Issue 17:6 (July/Aug 1994) of Fanfare Magazine.