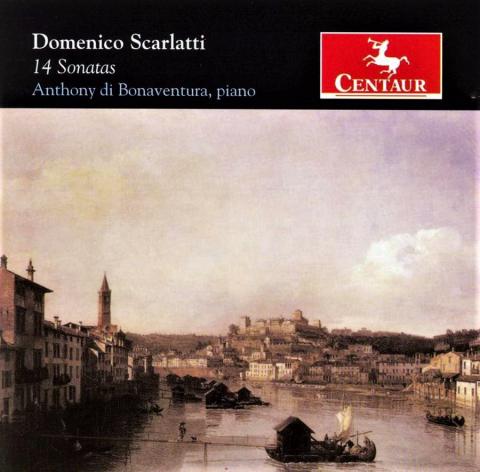 Some pianists, for all their artistic greatness and international experience, never quite break through to wider public recognition. Anthony di Bonaventura, born in Follensbee, W.Va., in 1930, seems to be among them. Mr. di Bonaventura's career started auspiciously and early. He made his debut with the New York Philharmonic at 13, playing Beethoven's Third Piano Concerto. In 1959 Otto Klemperer chose him to play a Beethoven concerto cycle with the Philharmonia Orchestra of London. He has long been a prominent performer of contemporary music, with works written for him by Vincent Persichetti, Luciano Berio, Alberto Ginastera and Gyorgy Ligeti, among others. Mr. di Bonaventura's devotion to teaching has kept him living in the Boston area, where he has been on the faculty of Boston University since 1973. He has just added a new release of Scarlatti sonatas to his distinguished discography of recordings, though "just" is not quite the word. This impressive album, recorded in New York in 2001, was issued late last year. As ever, Mr. di Bonaventura plays with pristine clarity, exquisite technique and impeccable musicianship. He has long had a special affinity for Scarlatti's single-movement sonatas. For this program of 14 works he has chosen some of the less familiar sonatas, like the capricious A flat (K. 127), an elusive piece that keeps shifting moods: by turns playful, episodic and curious. Mr. di Bonaventura vividly conveys the fanfares, hunting calls and Spanish-influenced dance rhythms that run through this music, as in the jocular Sonata in E (K. 216). And he elegantly articulates Scarlatti's intricate contrapuntal writing, which threads through boldly shifting modes and keys in these inventive pieces. The pensive and elegant Sonata in C minor (K. 302) comes across as a work of astounding nobility and harmonic ingenuity. This recording is worth the wait. ANTHONY TOMMASINI, New York Times (11/11/2007)